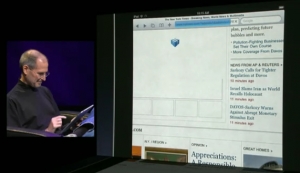 Like any Apple fan, I want to run out and buy an iPad today. I’ve wanted an eReader for quite some time now, and have been dragging my feet on getting a Kindle only because I wanted to see if Apple could produce something better. Notwithstanding the current lack of reviews of its text quality, the iPad certainly seems to be the more compelling device.

But there is a serious question you should ask yourself before taking the plunge. How would you feel if someone took your current computer (laptop, desktop- whatever it is you use on a daily basis) and told you that you could only install software on it that the manufacturer authorized? Do you currently check with Dell to see if it’s OK to install Photoshop or Chrome on your machine? With the iPad, that will be your Brave New World. Want to install the latest beta of your favorite program? Well, unless Apple makes radical changes to the App Store, you won’t be able to do that.

As an iPhone user, I was willing to make some concessions to Apple regarding what apps could and could not do on the device. It is after all a phone, and I want my phone to work when I use it. I don’t want the battery to die unexpectedly because some app was running in the background, or to lose my data because another app decided to scribble all over the file system. A phone is an appliance, and by and large you want an appliance to behave predictably and reliably.

But a tablet computer isn’t quite the same thing. It sits vaguely between “ebook reader” and “laptop computer”. As time goes on, I expect that laptops in general will start to look more and more like tablets. As Jobs said,

“Browsing, Email, Photos, Video, Music, Games, eBooks… if there’s gonna be a third category of device, it’s gonna have to be better at these kinds of tasks than a laptop or a smartphone, otherwise it has no reason for being.”

Right now you might use the iPad to read the New York Times while waiting for your bus, or to check your email while sitting in a café. But will you eventually use it for actual work? If the technology gets good enough, will you leave your laptop behind and starting using your tablet for everything? Once you really come to rely on it for your work, will you still be comfortable with Apple exerting total control over every piece of software you install on it?

Did you notice during the demo that when Steve Jobs went to the NY Times website, there were lots of “missing plugin” icons where the Flash ads should have been? At first I thought this was just an embarrassing mistake in delivery, but the more I think about it, the more I’ve come to believe that this was entirely intentional- a message to the NY Times directly from Mr Jobs, saying that their website will look like crap on the device until they dump Flash.

Apple’s antipathy towards Flash, and Adobe in general, is nothing new. And as much as I would love to see Flash banished from the web, this kind of complete control by Apple really worries me. Don’t get me wrong- I really want one of these devices. But I’m not so sure I’m ready to give up that much control to Apple just yet.